The concept of Capsule Hostels was developed in Osaka, Japan in 1979. The idea of sharing a room with many strangers didn’t appeal to everybody back then. But in this way, you can get privacy but pay less than in a ‘normal’ hotel. The bed is fitted in a capsule that you can open or close at will, giving you control on your privacy. As the youth hostel became popular, young travellers started to catch sight of pod hostels. A pod hostel offers many advantages over the traditional bunk-bed hostels and is slowly starting to develop more and more in Europe.

In our pods, you’ll have all the privacy you need while at the same time, you are still staying at a hostel where you can socialise with your roommates or other travellers in the lounge area. Isn’t it the best? 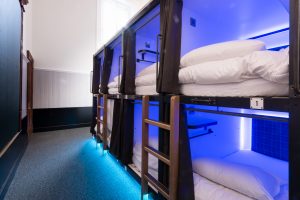 Female dorms in a capsule hostel

Most of the hostels offer both mixed dorms and female-only dorms as a hostel standard around the world. If you are a girl, you might feel a bit worried about staying at a hostel by yourself. For single travellers, we would like to recommend you to stay at a capsule hostel which has women-only facilities. There is a genuine demand for capsule hostels for women in Asian countries, where is the concept of pod beds originally from.  It is an important response to travellers’ wants,  for cultural or religious reason, preference of room-mates, general safety or comfort concerns. Moreover, many hostels now feature full-length mirrors, quality lighting, lots of hooks, wardrobes, hairdryers and other ‘girl-friendly’ features. Obviously, this kind of added value for our customers should be a priority for any good hostel. 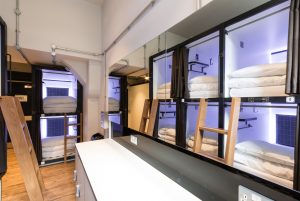 Sleep good in a POD

While sleeping pods offer more privacy than ever before, it features colourful LED lighting, cosy mattresses, and sockets for charging your electronics. In the individual pods, everyone has a much more marked space, so people are unlikely to leave their stuff everywhere on the ground. Additionally, the pod is designed with storage and a keypad locker. You can create your own pin code lock your important belongings. You might want to go to bed on an early evening to catch an early flight the next morning or sleepover after a night out, you can control your own light in the pod as opposed to a battle in a traditional bunk-bed dorm. The idea of sleeping in a pod is not only about saving money, but also became a trend and special place to sleep rather than a budget type accommodation.

Are you convinced? Have a look at our availability!